The organic product Biodeur 3x1g, suitable for the care of nails and skin on feet prone to mould, odour, and sweating, applied as a foot bath, gets not only on the heels and soles, but also between the toes.

Smelly and Sweaty Feet
Sweaty feet are not only uncomfortable, but can also cause health problems. The top layer of the skin is constantly moistened, which creates an ideal environment for the proliferation of bacteria and fungi on feet and nails.

Eccrine sweat glands are located throughout the body, including the feet. There are between 2 – 3 million of them in the human body, and they secrete larger amounts of sweat than apocrine glands. This system of sweat glands works as natural thermoregulation and moisturizes the skin based on impulses from the hypothalamus. In hot weather the output may exceed 11 litres a day. Some eccrine glands also respond to other stimuli, for example those located on the forehead or in the armpits, palms, or feet are triggered without any dependency on the ambient temperature or muscle strain, usually during mental stress. For the feet, socks, and shoes, we recommend the use of our talcum powder Biodeur Prevent Foot Powder – suitable for the care of feet prone to odour, perspiration, and fungal diseases. 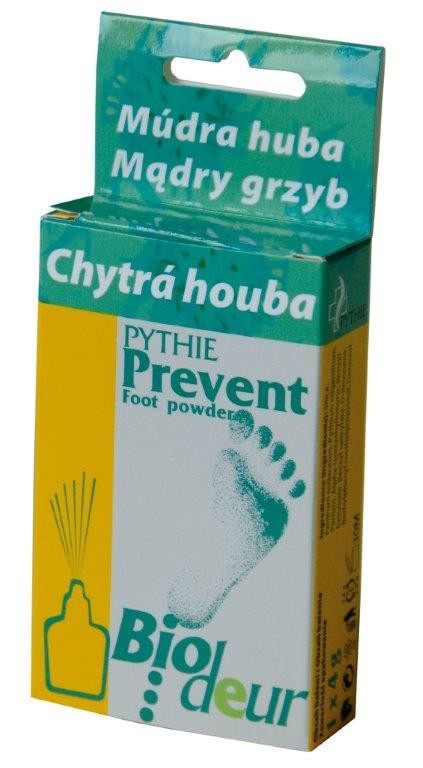 Unless properly sprayed with special preparations, fungi can live and thrive in shoes and socks. It is advisable to wear high-quality cotton socks that allow your feet to breathe and also to make sure they are washed at 40 °C to destroy fungal spores. To prevent re-infection by fungi, we recommend Pythie Biodeur Prevent - a biological preparation in tablets, suitable for the care of skin prone to mould, odour, and perspiration.

Susceptibility to Mould between Toes and on the Skin on  Feet
Mycosis is an infection that can affect a person in case they step on a flake of skin attacked by mould with bare foot. This usually takes place in risky areas such as common bathrooms, borrowed shoes or slippers, or when walking barefoot in public areas or on carpets in hotels.

The common denominators for initiation of a fungal disease are heat and moisture, skin maceration, mechanical microtrauma, propagation of faecal microflora and unpleasant odour. If you do not pay enough attention to these symptoms, you may also eventually suffer nail plate ailments. There are many people affected by dermatomycosis of the feet.

According to a recent extensive study, it was found that just in the Czech Republic more than 60% of adult population suffer from fungal diseases, with an annual growth of this trend of 2.5 – 8%. The most common occurrence is between the  toes, on the heels and soles. 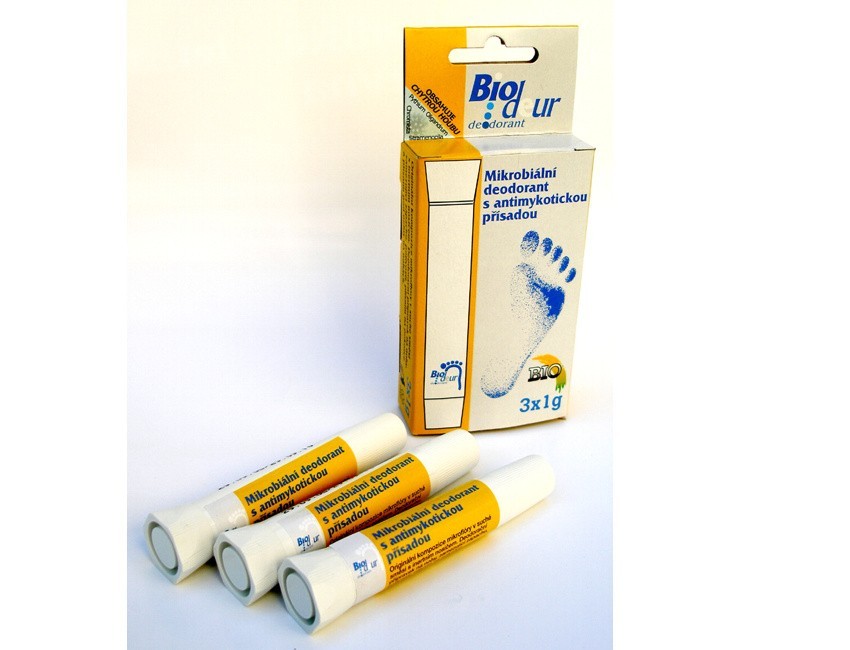 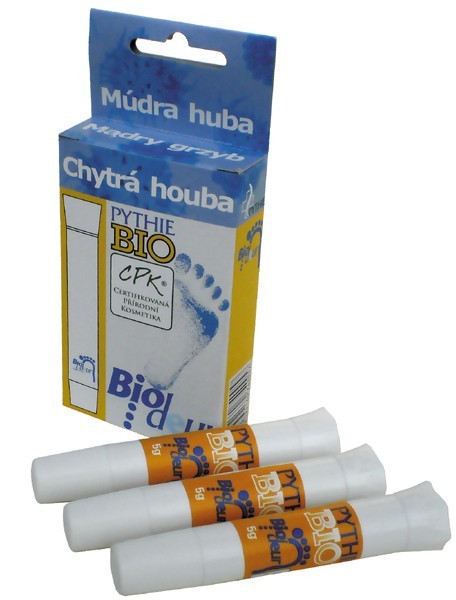 The organic product Biodeur 3x1g is suitable for the care of nails and skin on feet prone to mould, odour and sweating. Applied as a foot bath, it reaches the heels, soles and also between the toes. For best result, let your feet dry naturally after the foot bath. In case of a repeated application or routine prevention, you can also use Biodeur 1x1g.

To prevent the return of fungal infections, use Pythie Biodeur Prevent.

All the products are available in pharmacies (Czech Republic).

Susceptibility to Mould on Toenails
Onychomycoses are quite common among dermatologic diseases, and their incidence has been steadily increasing. Officially, 2 – 8% of the Czech population is already affected but certain extensive studies report as much as up to 26.9%.

Increase in public awareness and introduction of new effective drugs have led to increased enthusiasm among the affected people, supported by the great effort of doctors to find an appropriate treatment and the correct therapy. However, the treatment is often prescribed without knowing or determining the source of the fungal infection. The most common causes are dermatophytes (Trichophyton rubrum, Trichophyton mentagrophytes), yeast (Candida albicans and Candida parapsilosis), and opportunistic micromycetes.

The relative efficacy of anti-fungal drugs against a variety of pathogens is not entirely definite, while medications are often prescribed for the wrong period of time or the patient does not follow the recommended duration of application. Systemic drugs have the best effect, which unfortunately comes with side effects.

Biodeur 3x1g is a universal product for nails susceptible to fungal infections. It is applied in the form of nail wrap. For additional therapy it is  possible to purchase a smaller pack - Biodeur 1x1g. A good alternative is our certified Organic product BIO Biodeur.

The special nail preparation Smart Fungus Pythie Biodeur Nail is an organic product suitable for the care of toenails that are prone to mould formation. It is used mainly when a cultivation smear has previously confirmed presence of Trichophyton rubrum. The aim is to ensure healthy growth of the nail from the nail plate. In case the growth of the new nail stops, it is necessary to repeat the two-day application.

All the products are available in pharmacies (Czech Republic).